The earliest possible references to vehicle registration and possibly license plates date back to ancient Rome at the time of Julius Caesar, 102 - 44 B.C. There are references to the licensing of chariots, but whether a number was marked on the chariot itself or onto an attachment to the vehicle is not known. 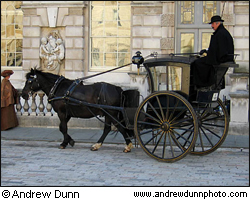 What may have continued over the centuries is a mystery until Victorian England in the 1880s. In The Hound of the Baskervilles by Sir Arthur Conan Doyle, Sherlock Holmes and Dr. Watson are found unsuccessfully trying to catch a public Hansom cab. Holmes, however, got close enough to the cab to spot its license number, which became a major clue in cracking the case.

As automobiles became more common in the late nineteenth and early twentieth century, a need for their registration arose. Prior to universal licensing at the state level, cities and counties issued their own license plates. Although actual plates were sometimes provided, more often than not these so-called pre-states were homemade -- commonly metal house numbers attached to a leather pad.

By action of its Legislature, New York became the first state to require vehicle registration as of April 25, 1901, and California followed suit later that year. The first New York issues were homemade plates, bearing the initials of the owner without any numbers. Massachusetts was the first state to actually issue plates, beginning in 1903. By 1918, all 48 of the contiguous United States were issuing license plate. Although they were territories at the time, Alaska and Hawaii began issuing plates in 1921 and 1922, respectively.

License plates have changed significantly over the years. Early plates were not fancy -- just the state name or abbreviation, a registration number, and, more often than not, the year. Fancy lettering, reflectorization, slogans, county names, illustrations or logos peculiar to a particular state became more common as time passed. Since the American Bicentennial, the states have begun issuing graphic plates having scenes, slogans, or elaborate devices silk-screened onto the plates. For many years plates had the numbers and letters embossed or stamped into the metal and painted. Now the trend is toward flat, un-embossed plates.

Beginning in 1957, most types of North American plates have been a standard size, six by twelve inches. Prior to that, different sizes and shapes were not uncommon. Plates were normally rectangular, but oval, square, round, and triangular shapes were used. For a number of years, Kansas and Tennessee cut their plates to match the shaped of the state itself.

The distinction for the most unusually shaped plates goes to Northwest Territories and Nunavut in Canada, which have their plates cut in the shape of a bear.

A wide variety of materials has been used for license plates. Metal is most commonly used, with steel and aluminum leading the way. Tin, copper, and brass have been used as well. Early plates for many states were porcelain covered steel,

but these soon proved to be too expensive to produce in the quantity needed. Wood, rubber, pressed soybean meal, cardboard, and plastic have been used in lieu of metal or when metal supplies were limited, as was the case during World War II. Windshield stickers, or metal tabs or stickers attached to the plates themselves have been employed for the renewal of plates. In April 1909, matched pairs of white on black porcelain plates were provided by the state to all registered vehicle owners for the first time. The numbering sequence began at 1,000 that year to allow for continuing use of earlier registrations through the end of 1909. The unusual license plate numbering sequence of the previous year was changed for 1910. Plates were issued in numerical order starting with number 1 and continuing upward.

The state issued a new pair of porcelain plates to vehicle owners each year from 1910 through 1915. An early peculiarity saw two distinct variations produced of 1913 and 1914 plates. An added fact is that motorcycles and automobiles were issued the same size and style license plates until 1913. A separate series was introduced for motorcycles in 1914.

In 1916 the state switched from porcelain to a painted embossed steel tag. Between 1929 and 1937, and again in 1940 and 1941, blue and yellow was adopted as a standard color scheme, alternating each year from background to numbering color. Plates made for 1938 and 1939 featured a silver and maroon alternating combination. The 1929 issue also saw the introduction of the famous "diamond" graphic symbol. Motor vehicle registrations did not reach five digits until 1917.

Commercial vehicles were given a separate plate series in 1923. The distinctive oval-shaped tags were issued through 1928. In 1929, the more commonly known letter "C" prefix was added and the oval shape discontinued. The earliest known plate bearing the prefix designation "T", for trailer, is 1920. Another uniquely Delaware point of license plate lore saw the letter "X" used as a prefix marker on vehicle dealer plates from 1914 through 1936. Since 1937 dealer plates have been produced with the letter "D" as an identifier.

A little known detail is that there is no dated 1940 plate. Plates of this year and the year following carried the expiration dates of 3-31-41 (March 31, 1941) and 3-31-42 (March 31, 1942) respectively. These were the last of the single-year painted steel plates. The various types of registration other than passenger, commercial and motorcycle were for the most part spelled out in full on the turquoise & yellow colored 3-31-41 plates.

The highly recognizable white on black, date-tab-slotted, porcelain license plates premiered in 1941, issued as matched pairs to new registrants. Soon afterward the arrival of the wartime economy resulted in the state no longer issuing or requiring the display of plate "pairs". Many motorists simply removed the front plate and placed it on the shelf in the garage, which accounts for the high survival rate in nice condition of these 50+ year-old plates. There are three distinct varieties, or series, of the original "DEL.-style" porcelain plates. The first series, made by the Baltimore Enamel and Novelty Co., began at number 1 and ran to the end of the 75,000's, in pairs. A small diamond precedes the last three digits of 4 and 5 digit plates of this series. The distinct diamond shape does not appear on 3 digit or lower passenger plates. The second porcelain series is a short run of numbers from about 76,000 through the low 77,000's. The main characteristic of these single issued plates is there is no diamond mark separating any of the digits. Subtle differences in the number stencil design can also be recognized. The third series extends from about number 77,120 through approximately 87,000. These plates were produced in Lansdale, PA and carry the slant-stroke digits identical to those used on Pennsylvania license plates of this era. Both series 2 and 3 porcelains are rarely seen.

The majority of the black porcelain plates observed in use today are reproduction copies of the original series one style. These can easily be distinguished from the originals by the closer spacing of the bolt slots. In 1986 the Division of Motor Vehicles legalized the manufacture of accurate replicas due to popular demand by adopting DMV "Policy Regulation 79". There is only one company actively supplying the demand for these plates. The Delaware Historic Plate Company produces a consistently high-quality tag faithful to the original design. Delaware is the only state that allows private manufacture of plates for legal registration purposes, and the only state to have retained the famed porcelain plates in the modern era. 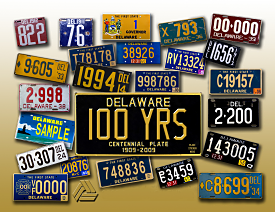 The porcelain plates were supplanted in about 1947 by black painted stainless steel plates with bare stainless digits. The full spelling for "DELAWARE" was embossed across the top and the tab slots were shifted to the bottom of the plate. In 1951 the addition of white reflective material to the digits greatly improved the night visibility of these plates. Also at this time the "P/C" designation was first introduced.

In 1957 the entire country switched to standard-size 6"x 12" license plates. Delaware was the last state to adapt to this changeover, and remains the only state with non-standard size plates in current use.

The modern style reflective gold on blue plate was first introduced in 1958. The familiar "THE FIRST STATE" slogan was added four years later. Flat silkscreened plates were introduced in late 1968, as a fabrication improvement over the riveted number system.

The style of Delaware's license plate has not changed much in nearly 50 years. A clear indication of the respect shown for the simple and distinguished design. The black onyx and heritage gold colored Centennial License Plate is a celebration of 100 years of state issued license plates. It is our sincere hope that the Centennial Plate will add another unique chapter to the 100 years of our states license plate history.

Special thanks to our good friend & avid license plate collector, Dave Lincoln. Dave's extensive knowledge was the main resource for this section on the history of Delaware license plates.

SERVICE DISCLAIMER: Customers are required to wear shirts and shoes in order to conduct business at DMV. Services will not be rendered if customers are not wearing shirts or shoes. Thank you for your understanding.